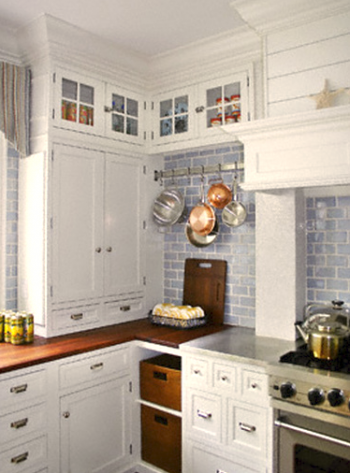 While fighting with my jammed kitchen drawer this morning, I came to the conclusion that I am a kitchen item hoarder.  It’s not intentional. It sort of crept up on me over the years. I don’t keep things because I can’t bear to get rid of them. I just keep putting more things on top of the old things and before you know it, I can’t close (or open) my utensil drawer anymore. I mean, how many tongs does one girl really need? Somewhere in the course of my adult life, I have managed to adopt utensil triplets. When it comes to wooden spoons, I’m right up there with Octomum.  Even if I played the castanets with my tongs, I can only use two pairs at any one time. When did this all happen?

So I pulled out my trusty plastic bags and filled them up, ready to donate to my girlfriends and to charity. A spare of any utensil is great; any more is a waste of space. After seeing the beam of white light from my cleansed utensil tray, I was inspired and turned to the crockery cupboard. What lay beneath excited me.

I am the queen of crockery destruction. Like those adept Master Chefs who can crack an egg with one hand, I am capable of chipping two dishes in one foul swoop. With one swift hand movement I can reach into the dishwasher and voila! Chips in every direction! And then with equal finesse, I neatly stack the newly pock-marked dishes back into the cupboard. Why? It’s a reflex action I suppose. I don’t think twice. I’m usually in such a rush that I think I’ll work it out later. But there is never a later and instead, I now have a mismatching set of crockery.

So this morning I decided that either I’ll have to chip the last one so it matches the rest, or, novel idea, buy another set. Correll make a tempting non- chip range. But where’s the challenge in that?  I’d like to test my skills at maintaining a set chip-free for at least a year. So I headed out to buy a set at Ikea.

Ikea is the equivalent to me of what a hardware store means to a man. I dream, I aspire, I lie down on a mattress under the pretext I’m testing it; it’s my playground and I love it. But today, I was on a mission. I marched straight to the kitchenware department. But there were challenges ahead. I first had to pass through the utensil section. I felt beads of sweat forming as I mustered my determination not to bring home a little brother or sister to my two remaining tongs. My resolution stayed firm. I would just have to learn to adapt.

And then I saw my redemption. Yes, Ikea sell inexpensive crockery sets, but they also sell...replacements! I felt acknowledged and no longer the isolated misfit of porcelain protection.  I bought a plain set AND a couple of replacements as backups. Well, a challenge is one thing, but being prepared is also important. Change takes time, but as long as I had the right attitude, I could see my way forward.

This evening I sit in front of my new plates. The old ones have been relegated to the recycling bin. Even in destruction, I can do my bit for the environment. My kitchen feels cleaner, my mind calmer. I feel I have stepped up a notch from a Desperate Housewife to a Master Chef.  I’m going to put my cracking skills to the ultimate test. That egg stands no chance. Why? Because I am renewed, I am more organised, I am a Mother Moving Forward!