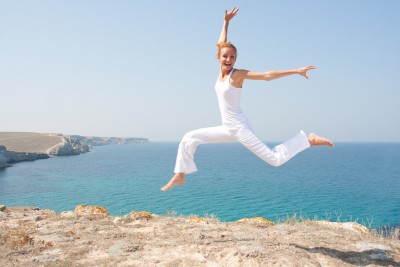 Leaps of faith are not based on religion. They are based on trust. Trust of ourselves; trust that we deserve better than the meager pickings that some of us are left to manage with; trust that the world has a better life in store for us than what we currently live.

I know many stories of people who trusted that their life could be better and aimed their attitude towards their goals.  They then watched their life unfold to become what they truly wanted. It’s inspirational, not lucky. They may not have won lotto (that’s lucky), but they have turned their life around from misfortune to strength. These people have done the hard work of shifting their thoughts and attitude, even when confronted with the rollercoaster of problems that most of us suffer. They pick themselves up, dust off themselves - and most importantly, their attitude - and continue to move forward. A mental resilience, rather than a physical one, is what they develop. Time and time again, I see it work out!

A friend of mine needed money to go on a holiday. She was long time unemployed, a single mother of three and desperate to visit family in the US. Her wish list was: money for trip and a great part time job.  But she also believed in the concept of trust so she acted as if the trip would happen. She asked her ex if he would mind their kids for three weeks if she went. She then met with a travel agent and booked a seat to the US. She had to pay up in a week’s time. How, she didn’t know.

Within a week, the most unexpected thing happened; she opened her mailbox to find a cheque for $10,000!  She had written a book ten years earlier and had forgotten about it, thinking she had never earned any money from it. But just when she needed it, her royalties turned up! A month later she was on a plane and in between, she was offered a great part time job, starting when she returned from her holiday.

Some may say she was lucky, but I would ask, why just at that particular moment did her royalty cheque arrive? Why did she get her great part time job just then when she had been out of work for over a year? She told me she had been depressed for so long that she knew she had to turn her thinking around or she would keep getting more of the same. She knew she just had to trust it would all work out. She acted as if it would. That was the key. She believed she deserved better, spoke to herself better and acted as if it would happen. It did.

I found her story inspiring. It showed me that we never know what goodness can lie around the corner, if only we believe that it can happen. That’s what a leap of faith is. And that's the leap I am taking at the moment.

So what it is that connects you to your inner self? What is it that you truly desire? Think not with longing but with hope...and with trust that it can happen. Don’t think it can’t happen to you. It can happen to us all!