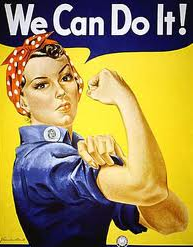 Yesterday I fixed the toilet seat. I know, it’s not a big deal to most people, but to me it was a major milestone. I have always had an aversion to fixing things. Maybe it’s because I was brought up in a household that celebrated the fact that our one screwdriver was our entire tool kit. Regardless, repair work was always something I left to the men in my life.

Becoming a single mother though, meant I either had to put up with the pictures not being hung and the door being squeaky, or learning to handle a hammer and nail and using WD40 (that stuff is amazing!).

Initially, the toilet seat not staying up wasn’t much of a concern for my daughter and I. As we never put the seat up, it was a non issue. The only time it became a major concern was when male friends or family visited and the toilet seat, refusing to stay up, would come crashing down mid stream, only to the yelps of male company.

In fairness to our friends, and not wanting a rather awkward liability suit on my hands, I decided to take out my trusty screwdriver and see if I could fix the falling seat. In the end, it was such an easy job to repair.  It had only been my fear of failure that had stopped me from wielding a drill, hammer and nails and becoming a virtual Ms Fix-It -All. Now, instead of banging a nail in with my heel, I know the difference between a spanner and a wrench, a drill bit and a raw plug. I feel emancipated!

So all you girls out there who feel that it’s a man’s job to fix things, get down and dirty and give it a try.  It’s actually a very liberating experience and you’ll be very proud of yourself for being a Mother Moving Forward!

Now if only I could learn how to change a down light...